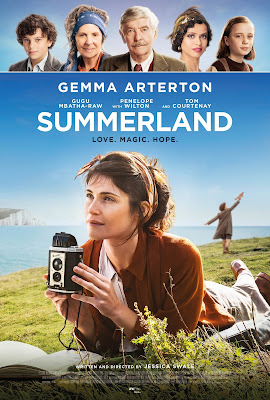 Alice is writing her new book.  As she does so she flashes back to the Second World War when she was a cranky young woman who lived on the outskirts of town. Forced to take in Frank, one of the children sent from London in order to remain safe from the bombing, she begins to open up and begins to deal with a lost love.

Beautifully acted, wonderfully made film suffers from a plot that we've seen any number of times before. Don't get me wrong everything is beautifully done  and the scenes and the performances have weight  but the thread that holds them together is nothing that we haven't seen before, with the exception of Alice's lost love is another woman.

You will forgive me if this piece isn't long deep and meaningful. It's not due to the fact that there really isn't anything wrong with anything in the film, it's simply that the filmmakers instead of trying to actually do something truly involving with the story instead went and hit everything on the ticky box list with the result that you know early on exactly precisely how this is going to go and you're exactly right.

I sighed when I realized that there were not going to be any surprises.

If you want to see a beautifully made film (craftwise it it one of the best films of 2020) and don't mind it taking you to places you've been before give SUMMERLAND a go.
Posted by Steve Kopian at July 27, 2020