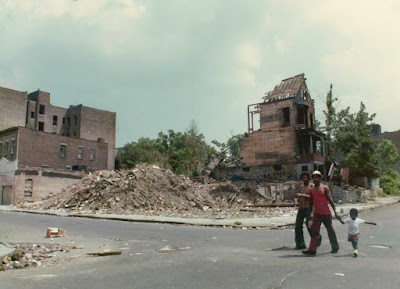 The autobiographical impulse is a powerful one for documentarians, particularly when their subjects turn to issues near to their hearts. For filmmaker Vivian Vazquez, few could be more important than her hometown of the Bronx. Her new film—co-directed by Gretchen Hildebran—spends the first fifteen or so minutes of its meager seventy-two minute runtime explaining her family’s backstory: how they immigrated from Puerto Rico in the 1950s, fled from Spanish Harlem to the more racially egalitarian and economically prestigious Bronx, and how they put down roots in one of the most vibrant post-war American communities. It’s only after this lengthy prologue that the film settles into its main topic: the decade-long wave of tenement fires that destroyed 80% of all Bronx housing in the 1970s, leaving a quarter million homeless. Once this shift occurs, Decade of Fire, becomes a very different film, a slow-motion horror story as Vazquez and Hildebran painstakingly chart the various racial, political, and economic causes to the urban holocaust.

A soul-deadening history lesson, it begins with the rise of redlining minority neighborhoods, leading in part to a decade of “White Flight” in the 1960s when a million white, middle class New Yorkers fled the city for the suburbs. Around 100,000 remaining non-whites were forced from their homes for the sake of Robert Moses’ “urban renewal” plans which tore down Manhattan tenements—did you know the Lincoln Center was built on top of the ruins of working class apartments?—leading to the ghettoization of the Bronx as greedy landlords crammed dozens of people into apartments intended for single families. After that, the landlords simply stopped paying for upkeep, hired local gangs to torch the buildings, and collected state insurance claims which they pocketed before vanishing because, incredibly, state law didn’t require them to use said insurance to repair their properties. Even worse, the same “urban renewal” that decimated Manhattan housing led to the counterintuitive shuttering of many of the Bronx’s fire departments, leaving large swathes of the borough with no firefighters for when blazes broke out.

There’s more, but I hesitate to go on—I’m just regurgitating the film now. What I can say is that Decade of Fire is a chilling, necessary look at institutional betrayal and failure, yet also a glance into a vibrant community determined to rebuild itself, beginning with the family of one determined documentarian.