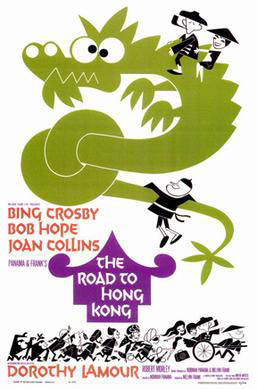 The final ROAD film is a scattershot affair with Hope and Crosby as entertainer/con men who end up dealing with a secret organization that wants the secret rocket formula that hope has locked in his brain.

An odd mix of comedy, satire, music and fourth wall-breaking nonsense, the film calls back to past glories while sending up the spy genres and films set in Asia that were filling theaters at the time. Some of it works, some of it crashes and burns, and some of the non-Asian actors in stereotypical performances makes you cringe. I smiled my way through the film but I never really laughed with the film being way too knowing to ever really fall into. 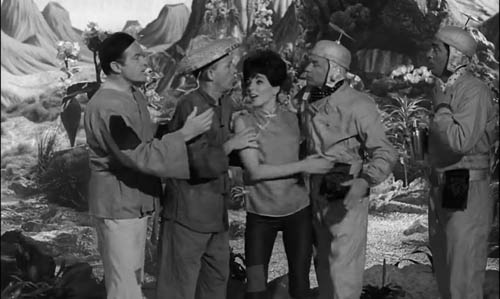 Hope and Crosby play their roles on autopilot, which for them makes them entertaining. Joan Collins fills in for a mostly absent Dorothy Lamour and is much better than the material she's given. Lamour shows up toward the end playing herself and singing a couple of songs. As for the cameos — they're amusing throwaways with Peter Sellers getting the most screen time as an Indian doctor who runs rings around the Hope and Crosby.

Even by the up and down standards of the series, this is just amusing diversion but little else.