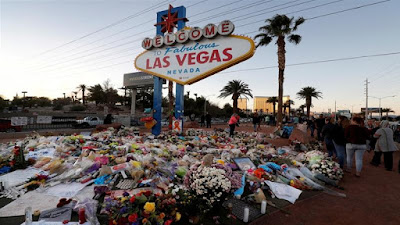 As bad as other cities are Las Vegas appears to be the capital of corruption and with the MGM being supreme slimeballs who effectively caused the October 1 shooting that killed 58 and injured hundreds more. The case against everybody is laid out in MONEY MACHINE a look into the dark side of Vegas and the aftermath of the shooting.

For those who don't remember what happened on October 1 2017, Stephen Paddock, a professional gambler took a cache of weapons up to the 32nd floor of the Mandalay Bay in Las Vegas and shot up a music festival below.  Paddock was killed by police. A lot of questions as to what happened and why were raised and the Las Vegas police, the FBI and MGM were not been entirely forthcoming with answers. Worse the story that leaked out despite an attempt at cover-up was that it was preventable and that they knew something like this was possible.

You have to stay with MONEY MACHINE because it throws a lot of information at you. Along the way it reveals the city's dark under belly which despite being family friendly(or wanting to appear as such) is really still about taking as much money as possible and making any troubles disappear (even if it is in a shallow grave in the desert). The film also looks into reports of whether there were multiple shooters (there weren't), where the money raised for the victims really went, how the MGM sued the victims blaming them for being in the line of fire, how the settlement was tainted (the arbitrator is the daughter of an MGM exec) and how Casinos control all of Vegas. It's a lot to take in and at times it feels like it's going off course but it does pull it all together in the end.

Your jaw will hang open in disbelief.

This is a frightening look at what happens in Vegas and at the rot that is behind the facade of respectability. Clearly the a bunch of crooks are running the city they just aren't named Bugsy Siegel or Meyer Lansky or old school mafia but on the marquees of all the hotels. By the end of the 85 minute run time you will never want to go to Vegas- and especially an MGM run resort ever again.