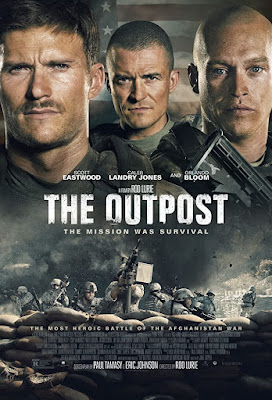 This is the true story of the attack on Combat Outpost Keating in what became known as the Battle of  Kamdesh. A large contingent of 300 to 400 Taliban soldiers attacked the remote outpost not long after the outpost was announced as being shut down. 53 Americans held off the attack until they were rescued. The unit was one of the most decorated in Army history

Actually this is not really the story of the attack as such but the men who fought  in the battle, died trying to protect their brothers and the survivors who were left to make sense of what happened. The actual battle occurs an hour into the film and only takes up about a half hour, or a quarter of the running time.

THE OUTPOST is an okay film. The problem with the film is not the final hour with the attack on the outpost, nor with the aftermath sequence, rather it is the first hour of the of the film. In the first hour is that the film never manages to make most of the soldiers stand out. All of the characters kind of blur together into your typical movie soup.  While I recognized the faces I never really got a handle on most of the characters beyond they were soldiers. Even Orlando Bloom was only Orlando Bloom because he really wasn't given much to do beyond being the leader. I wouldn't care but the fact that we can't really differentiate to guys as people makes the death of some of them less moving cinematically.

To me one of the best things I like about the film is it doesn't just end with the attack being done and a final fade out. What I like is that we get a sense of the loss and the aftermath when the battle is done. I like that not all the guys are okay after the fact.

And yes the battle sequences are quite good.

Is THE OUTPOST worth seeing?

If you like war films it is. If you are interested in what happened in Afghanistan as well. Beyond that you're on your own.
Posted by Steve Kopian at July 02, 2020