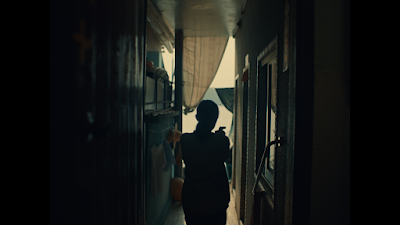 With the Tribeca Film Festival in a kind of limbo, I was asked to screen some of the shorts that were to play the fest and review them. LAST FERRY is one of them.

I have not seen director Linhan Zhang‘s first film but if LAST FERRY FROM GRASS ISLAND is any indication these are the first steps of a cinematic artist of the highest order. A perfectly modulated short film is manages to be suspenseful, funny and deeply moving in ways that few shorts and few features ever manage.

How good is the film? When I finished it I emailed every person I thought might be covering Tribeca this year and told them they had to see the film.

Yes, it is that good.

The film is a small tale of an assassin dispatched to kill her master. She must kill him before the last ferry off the island. Of course it doesn’t go as expected for anyone.

Where do I begin? Probably with Giorgos Valsamis' cinematography. Perfectly framed images, largely wide shots with no real cuts, put us on the island. More importantly each shot, no matter how perfectly framed feels natural. Neither director Zhang nor his cameraman has chosen a shot just because it looks great, there is a purpose for each image. Seriously- every shot makes perfect sense. Even the choice of the moment when the film goes close- it is perfectly chosen. It was the exact right moment to change things up and the moment is utterly shattering.

The story is perfectly told. By the time the film comes to an end we know everything we need to know. We’ve seen everything we need to see. Its clear that this a moment and that life happened before the film and continues after it. Should Zhang want to use this as proof of concept for a feature he has a film that is probably the most perfect one I’ve ever seen. Too often when I see a short that was turned into a feature it doesn’t resemble the final product. Often it is simply because in making the short there is no where to go. The writers and directors only know the moments in their short. Here Zhang knows the lives of all the characters. They live beyond this 14 minute stop in and it not only makes the film a launch for a feature, but, and this is most important, it makes for a film that is infinitely more satisfying than 99% of any other films out there.

LAST FERRY is a masterpiece. Cinematographer Valsamis has a godlike eye. Director Zhang is a talent of the highest order and must go on any film lovers list of directors to watch. Someone please give him the money to make a feature.

Look for an interview with director Linhan Zhang soon.
Posted by Steve Kopian at March 30, 2020