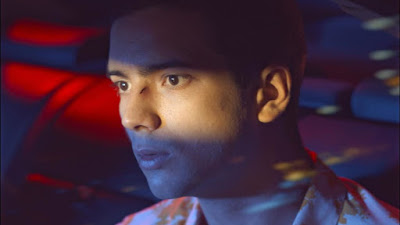 If you click with the award winning BURNING GHOST you will have found yourself a new favorite film. A stunning dreamy ethereal romance/mediation on life and death this is the first film that I have ever encountered at any Rendez-Vous With French Cinema where I purchased a ticket to see it in a theater at the festival after seeing it on a screener. A stunning piece of filmmaking it’s gorgeous imagery demands to be seen big and in a darkened theater.

The plot of the film had young Juste wandering Paris. Able to see the dead he is tasked with helping them cross over to the next life. Along the way he meets Agathe who he knew ten years earlier. A romance blossoms causing complications to his existence.

Told in an assured and deliberate style that mirrors a waking dream. Things are not always spelled out, bits drift and the seeing lack of being straight forward may keep you from clicking at first. The reality is that the film does give us everything we need to know, it just takes its time in letting you know it’s all there. This is a film with a feel that is like Juste's‘s existence or perhaps the life of one of those he helps cross over- a bit confused at first and then something else instead.

That the film works so well is do to the film's stunning cinematography which give Paris a look unlike anything I’ve ever experienced. Yes it is the legendary city but there is something special about it- particularly at night with wonderful colorful images that are like a big hug.

Also selling everything is the glorious cast. Thimotée Robart as Juste is amazing, as is Judith Chemla as his love.

This is special film that has burned itself into my heart and is a must see.