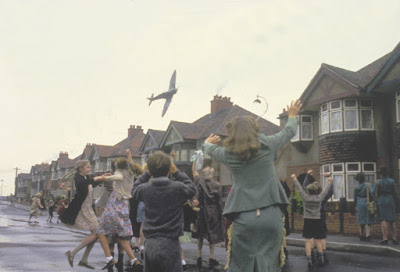 I write this on Day 15 of my COVID-19 quarantine in Brooklyn, New York and Day 4 of my subsequent unemployment. The days are all running together now, and I have to rely on my roommate to help me keep track of the passage of days. I haven’t spent time with my friends or family in weeks, and it’ll probably be many months until I do. I stay inside 23 hours a day, leaving my apartment only for groceries and a short run. Our once lively neighborhood is a graveyard of shuttered businesses, and the people out walking their dogs dress like plague doctors with every centimeter of skin covered. Everyone I talk to in the lobby, in the elevator, and on social media agree that we are all going to carry the scars of this quarantine for the rest of our lives. But I worry mostly about the children and how this lock-up will imprint itself on their psyches. If I had to guess, I think they’ll remember this time much like John Boorman did in his semi-autobiographical account of his own youth growing up in the Blitz during World War Two in Hope and Glory (1987): as a mixture of farce, tragedy, and boredom in the face of a vague, unknowable existential threat.

The underlying current beneath the film is the sense of childlike innocence and ignorance in the face of cataclysm and, even more importantly, the anxiety and terror of their parents. Consider the scene where the protagonist Billy Rowan (Sebastian Rice-Edwards) first learns of the declaration of war against Nazi Germany. We see him playing in the grass when he notices the sound of lawnmowers up and down his block going silent, settling back down to his games afterwards and puzzling over how none of the lawnmowers “sounded quite right” when they started back up. Or what about the first time his family huddles in their backyard shelter during a nighttime bombing raid? His bossy older sister Dawn (Sammi Davis) forces her way outside declaring she’d rather die than be trapped underground, calling Billy out to marvel at the “fireworks” of exploding bombs and flak.

While the country mobilizes for war, Billy idles away his days exploring (and wrecking) bombed out houses with other boys, greedily collecting unexploded ordnance. The launching of a nearby barrage balloon is treated as a grand event, the children marveling at its Goliathan bulk, completely oblivious to how its presence indicates that their quaint neighborhood is a prime target for the Nazis. And finally, when his family’s house burns down (not from enemy bombs but from a random accident), he mourns not the loss of his home but the incineration of his toy soldiers. As Pauline Kael pointed out, Boorman doesn’t downplay the horrors of war. Instead, he recontextualizes them within the worldview of children. The sound of cannon fire might echo across the English Channel, but it’s nothing to Billy compared to the ghastly fighting between his nerve-shredded mother and Dawn who refuses to observe bomb-raid curfew so she can party, sleep around, and eventually get pregnant by a Canadian soldier. And the grim specter of the Hun Himself, Adolf Hitler, is nothing compared to the tyranny of his overbearing, over-zealous, bible-thumping schoolmaster.

And yet, for all the fear and terror, Hope and Glory is ultimately hopeful. How could it not be, we ask, when we know that their sacrifices will ultimately be worth it when the Allies finally win? But notice how the film doesn’t actually end with the Nazis surrendering. Instead, it ends with Billy joyfully discovering that his hated schoolhouse has been bombed. It’s easy to imagine that Billy will remember this better than the actual end of the war, for it spoke to something closer and more personal to him than fighting happening somewhere far, far away. And I think today’s children will remember the Coronavirus quarantine the same way. Will they remember the muttered discussions between their parents about rent payments and overcrowded hospitals? The news reports about record-breaking unemployment and mass graves around the world? Maybe, but in hindsight they won’t matter as much as the boredom of day-to-day life, the intimate tragedies of household injustices, and the unexpected joys that arise from the most unpredictable places. And for this small mercy, we should be thankful.
Posted by Steve Kopian at March 28, 2020