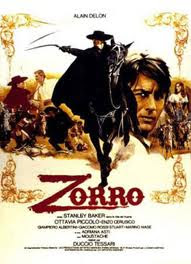 One of  the best Zorror films has an ear worm theme song. If yu hear it it will never leave you no matter how hard you try.
It is also a perfect mix of action and humor.

See it on streaming on Amazon

Alain Delon plays Zorro in a stand alone film that's loved by many and hated by others.

If you want to know if you've ever seen the film all you need to do is think of the ear worm of a theme song which goes in part:

Here's to being free
Here's to you and me
Here's to living free
La la la now that Zorro's back.

The plot of the film has Delon meeting a friend who is to be governor of a far off province of Spain. He is a good, honest man who is going to change things for the better. However the corrupt general and land owners want no part of it so they kill him. Delon promises his dying friend to take his place and he heads off to do right by him. He pretends to be ineffectual all the while riding off as Zorro to right wrongs. (Some of this lifts bits from Delon's earlier The Black Tulip and were then lifted in turn by George Hamilton in Zorro The Gay Blade)

It's a wonderful adventure film that is unjustly hated. Okay, if you don't like the theme song, which drives much of the picture, there is no way you're going to like the movie; but if you can get past that this film is a blast.
Posted by Steve Kopian at March 17, 2020