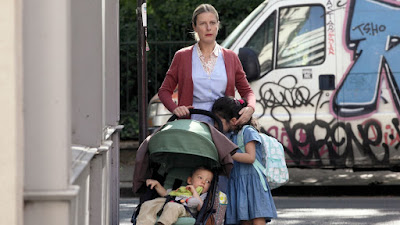 Based on a novel based on a notorious New York crime story PERFECT NANNY (aka Chanson douce or Lullabye in English) is the story of a couple who hires a new nanny who worms her way into their life only to have things go wrong.

An uneven thriller, the film seems to be juggling too many balls to fully be satisfying. One part thriller, one part psychological portrait and one part look at the ways of modern parenting, the film has a lot going on and the threads don’t always mesh seamlessly. More than a few times I was wondering what exactly I was watching and what the film anted to say if anything. It was never bad but it was never enough to keep me fully invested and as a result while I was shocked at the ending I wasn’t as horrified as I should have been.

The real reason to watch the film is the cast which puts it all into making the proceedings compelling. Karin Viard as the nanny gives a beautiful performance that deserves serious award consideration (she unjustly lost out the Cesar Award for Best Actress recently). It is one of those great nuanced performances that goes much deeper than the surface. We can see that there is a great deal going on inside her and we get a whole other level of what is going o by watching what is going on behind her eyes. If you need a reason to push you toward seeing this film it is Viard's performance which is sure to be the topic of major discussion when the film gets a regular US release.

Despite my reservations PERFECT NANNY is worth seeing. It plays March 9th and 11th at Rendez-Vous With French Cinema. For more information and tickets go here.
Posted by Steve Kopian at March 07, 2020