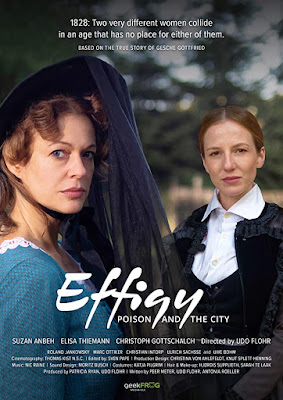 True story of two women in the German city of Bremen in the 1820's. As Cato Böhmer goes to work for a Senator, and the town begins and internal struggle concerning modernizing, ie building a railroad, someone is poisoning people with rat butter (cyanide laced cheese).

Solid historical drama is in some ways more interesting in the thematic issues it raises. Questions of a a woman's place in nineteenth century society are intriguingly explored as we follow Bohmer's struggle to be taken seriously despite being clearly better than any four men around her combined. We also end up watching what society does to women on the fringes via the tale of serial killer Gesche Gottfried.

While the film is recommended I do feel the need to warn you don't go into this film looking for a ripping mystery or murder tale. This film is most decidedly a drama of society and not a full on genre film. The elements are there, after ll one of the characters is a murderer, but that is not the film's focus.