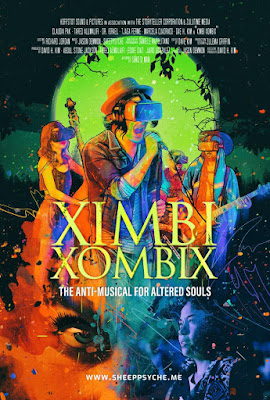 While I am trying to suggest films that most people will like or want to try I'm going far off the beat track with XIMBI XOMBIX because I want to program something that will work for those who really want to go off Hollywood and those who like experimental films or one's that take serious cinematic risks. This is the film for those who want to be on the edge f cinema.

As I say in the first line of the review I don't know if you will like it. I've read some good things about the film and some bad things, which means that director Dae Hoon Kim has made a film worth trying and discussing.  I should also point out that a VR directors cut of the film is coming. The version that is on Amazon Prime is not wholly VR though there are sequences in it.

I give you now a pointer toward the most experimental film in the festival. Please feel free to comment below.

There is no way that I can guess whether you are going to like XIMBI XOMBIX. I am not being flippant or dismissive, it is simply that this is a one of a kind film that is going to to play well for those who are looking for a straight forward horror film, which is what it seems to be on first look.(xombi is way some people spell zombie)

The film takes place in an alternate world kind of like our own but different. modified foods are how people exist and it can have some unpleasant side effects. The reggae rock band Sheeppsyche takes center stage as the band gets a new member and that leads to the possibility of real success potentially at the expense of the way the used to do things.

If the explanation of the plot is a bit obtuse it is because things aren't fully clear on screen. Writer director and Sheeppsyche front man Dae Hoon Kim clearly has everything in his head, it just isn't all on the screen and it makes for an occasionally frustrating experience.

That doesn't mean that XIMBI XOMBIX is a bad film, rather it simply means that it isn't for everyone. You have to be willing to work with what the film gives you and go with that. You have to piece it all together and not let the film wash over you pointing you towards what it says you should think and feel.

Its at this point I can feel Kim and the other members of Sheeppsyche wanting to reach through the Internet and flog me. I can understand that, but at the same time I'm trying to explain a film that is one part horror film two parts social commentary and several parts concert film mashed into an art house shell.

I loved the music, I think some of the social commentary is on target and worthy of exploring  but at the same time some of the occasionally fragmentary structure and artistic choices hurt the film and make it tough to recommend to everyone. The use of VR imagery in a conventional film is a creative bold choice but its going to confuse anyone who doesn't know what it is and make those who do wonder why its really there. (A VR Director's Cut is coming)

The truth of the matter despite my reservations is that this is a singular vision from a singular artist. It is not for all audiences, which I think is perfectly fine. It is a film that tests the boundaries of  what a "conventional" film is and can be. As someone who is assaulted by much too conventional filmmaking on a daily basis I like to see films and filmmakers try to do something different. One of the reasons  Unseen Films was started was to highlight films like this - namely something that is wildly off the beaten path that you might never have known about - and really should try because it will challenge you in all the right ways.

If you want to try something different try XIMBI XOMBIX.
Posted by Steve Kopian at March 21, 2020