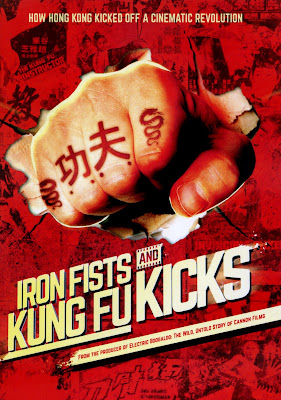 With everyone stuck inside do to Covid 19 the closest anyone is going to get to going to an actual real live film festival at home will be watching Serge Ou's IRON FISTS AND KUNG FU KICKS a history of martial arts film in Hong Kong.

I know you are wondering how the film is like being at a film festival since it's a streaming film, but it's true just let me explain.

If you ever went to the New York Asian Film Festival, before Subway Cinema stopped being the force behind it and Grady Hendrix stopped introducing every film, then you know exactly what this film is, it's film god Grady Hendrix talking about Hong Kong action films for two hours supplemented by pretty much every expert that ever sat in the audience of the New York Asian Film Festival or shared a stage with Grady. I don't think the film started out as a having Grady as the focus but his force of personality and his seemingly limitless depth of knowledge forced him front and center.

Trust me, as someone who has had many conversations Grady over the last decade, I can assure you the man knows everything about Asian cinema. When I was covering one of his events I would ask a quick question about a film and would be treated to a long explanation that opened my eyes to not just what ever I asked about but other related subjects as well. Make no mistake Grady Hendrix is one of the greatest cinema historians living today.

Watching the film we get an excellent overview of Hong Kong martial arts and its influence on world cinema. Its largely all here, and as a starting place for your education there is probably no place better. Of course if you really want to know more you'll need to do more research and watch more films (or pay Grady a lot of money to sit down with you), but as a start this film is perfect. (Actually what we need is a TV series expansion of the film)

Truth be told the real reason you'll want to watch this on Netflix or where ever, is the talking heads. Watching Grady and Ric Meyer and all the others talk with unrestrained passion about the films they love is a delight. They are excited, so we get excited. It will make you faal in love with the movis all over again.

Recommend for anyone who loves the movies