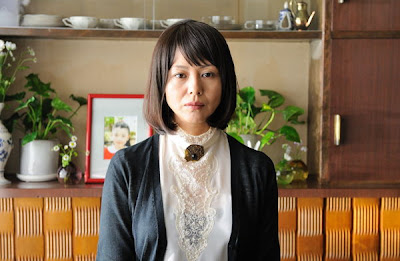 Kiyoshi Kurosawa returns to filmmaking after four years with the kick in the ass five part TV drama Penance.

The plot of the film follows the aftermath, some fifteen years after the fact, of the abduction and murder of a ten year old girl. Four of her friends saw the man responsible but the trauma of the event left them unable to say what he looked like. While still children the mother of the slain girl made them promise to either find the killer or perform some form of penance for not preventing the tragedy.

Fifteen years on the girls, now women are haunted in someway by the events and as the mother of the slain girl drifts back into their lives, they are forced to make choices about the men in their lives. The first four parts of the series are four separate but related stories of each of the girls. The final part follows the still grieving mother and dangerous path that she is forced to walk.

Taken as a whole this film is truly a kick in the ass. Its a riveting film that sustains it's almost five hour running time (and trust me no one got up to leave during the marathon screening). Its a story that plays out and builds on each part adding details and shadings as we go. It's the sort of thing that you'll want to see a second or third time when you're done with the first viewing because you're going to pick up things in later parts that affect the earlier ones.

While the film's story holds our attention  the film has two minor problems, first the first girl's story seems to go on forever. It's not bad, but the story of how the girl who lives alone and tries to keep the world away only to find herself falling into a marriage plays like it'sown unconnected movie. In all honesty you could, with minor tweaking have it play as it's own feature film. It's a great piece, but it kind of doesn't add anything to the main thrust relating to the murder 15 years earlier.

The other problem with the film is the plotting in the final part is a bit too neat. I don't want to say too much, since I've decided not to do a full on discussion of the film*, but things tie up too cleanly. What exactly I mean by that I'll leave for you to discover.

Minor flaws aside this is an incredible achievement in filmmaking and story telling.It's a film that anyone who likes shows like The Killing will want to track down.

*-After seeing the film I was torn between doing a review that was reasonably spoiler free or doing a full on discussion with all the plot twists and details laid out. I opted against the latter for two reasons, first almost none of you will have seen the film series so doing a full on discussion will reveal way too much before you get a chance to see it, thus clouding things when you do.