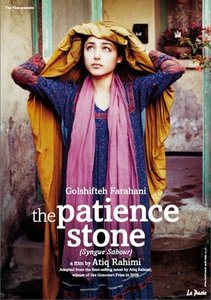 This is a repost of the second piece I wrote on THE PATIENCE STONE. Its a film that has haunted me longer than the four months mentioned here. Where I honestly can't remember most films I saw at Tribeca that year, I remembered this one. It is a small but powerful film worth your time.

It is currently on several streaming services.

I saw the PATIENCE STONE back at Tribeca 2013. When I saw the film I liked it. (My original review can be found here) And while I liked it I kind of expected it to end up like most of the 80 or so films I saw at the festival, half remembered two weeks after it's over.

That's not what happened.

What happened was the film haunted me. It stayed around the fringes of my psyche and dared me to forget it. I couldn't forget it and some four months on I'm still thinking about the film.

Actually what I'm thinking about is Golshifteh Farahani, the star of the film. She turns in one of the best performances of the year and maybe a couple of years. If the film works, and it does, its because she grabs you by the throat and makes you feel all of her characters pain and anguish and hope. She is on screen for the entire film and she makes every second count.

The plot of the film for those who don't know concerns a woman in an unnamed country taking care of her catatonic husband. He was injured in a stupid fight, and its left to her to care for him as the country and her neighborhood is engulfed in warfare. With time to kill and not expecting him to really recover she pours out her life to him as if he were the mythical patience stone, which will take all of your sorrow and then break leaving you with a new start.

It may not sound like much, but trust me Golshifteh Farahani makes it worth seeing. This is one of those performances of the ages. Assuming the right people see it look for the film,and Farahani's performance to end up on end of year lists. Sadly the film will not get Oscar notice since it was Afghanistan's entry last year, which means that there will be no Oscars this year. Its a major loss because if there were justice she'd at the very least get a nomination.

Do yourself a favor and go see it. Trust me this is one you'll want to see before your friends come to tell you about it. 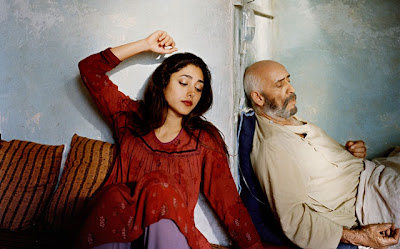