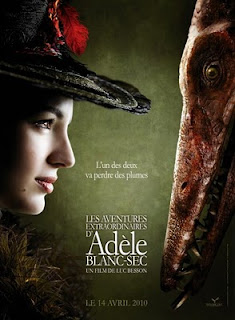 This is a review that I ran not long after this film came out on French DVD- which at the time was the only way to see it.  Since then I've seen the film in English- I like it on its own terms-hence the repost f the review- and I read the comic that covers the events in the film - and it's messy adaption.

Ultimately you'll want to take a look at this because it is not your typical pre-First World War tale since it has all sort of cool things, like a dinosaur.

See it on Amazon's VOD.

Luc Besson goes farther and farther past his once imposed limit of films he said he's direct with an adaption of a French Comic book series. The trailer showed mummies and a dinosaur and I was chomping at the bit to see it.


I'm sure it's going to show up in the US at some point-some day- but I couldn't wait. I picked up the DVD from Amazon France. The plus side I got to see the movie. The down side I have no frigging clue what the film's details were about because there is no English translations.

Yea, but what I saw amused the hell out of me that I'm looking forward to seeing the film with the words translated. (at least that way I won't have to wait until the end to know what was going on)

The plot of the film has something to do with Adele uncovering some sort of nefarious nonsense in Egypt. Meanwhile a mysterious force hatches a Pterosaurs in a Paris museum. Beyond that I don't have a clue since the neat visual pieces are linked by dialog in a language I don't speak.(There is also something to do with her sister who is in a coma due to a tennis accident)

Some of the colorful characters reminded me very much of Tintin and I can only hope that the Tintin movie looks as good as this.

I suspect that the non-gratuitous nude scene may bollocks the American release since the film appears to be solidly PG rated otherwise.

I have read a couple of reviews of the film which liked it, but didn't love it saying that the film is a bit unfocused (I think the film is actually based on 2 unrelated tales from the comic- but I could be wrong). Based on what I can understand the film does seem to be unfocused- then again I'll take it since some of the twists, such as the rescue by dinosaur isn't something you see every day- especially in pre-WW1 France.

Flawed or not definitely worth a look
Posted by Steve Kopian at March 17, 2020