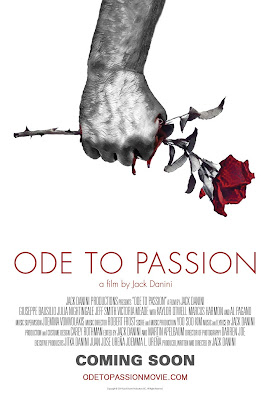 This musical romance is the story of Michael who has returns from Paris where he was for the last 3 years. Back in New York he meets and Sarah and instantly falls head over heels in love. But there is a problem, Sarah has a drug problem.

A stellar cast, great songs and a wonderful sense of New York City tell the frequently moving tale of romance...

... And at this point I step away and say this is not going to be a traditional review to say that any and all reaction to the film beyond that is going to be tied to how you react to the dialog which is written and delivered in a style similar Shakespearean iambic pentameter. In other words all of the dialog is in verse. I thought it worked in some sections, particularly where the speech patterns were closer to modern speech and where there wasn't a need to add extra words to fill out the rhyming scheme. I also found the shifts between the songs and the dialog jarring because the style of lyrics is not similar to the dialog. While it is never bad, the verse keeps the film, in my opinion, from truly soaring.

Is it worth seeing. Yes, most definitely. If the verse works for you you are going to eat this up.
Posted by Steve Kopian at March 28, 2020