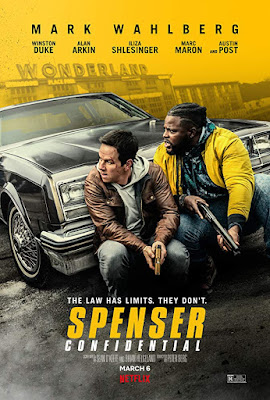 The Spenser character in SPENSER CONFIDNTIAL is not really the character created by Robert Parker in either his literary or television forms. The film is not really the Ace Atkins novel it is supposed to be based on.  It is something that is maybe 15% it’s source material and the rest is the buddy action film that Hollywood does reasonably well. and as long as you aren't a purist it isn't bad.

One time cop Spencer is released from prison. He beat the shit out of a homicide detective who was a dirty cop and was framed and sent to prison. Now that he is out the guys who framed him want him either dead or out of Massachusetts. Spencer doesn’t die and doesn’t leave. Instead he is drawn into a web of lies and crooked deals that bring him a chance to get pay back.

A complete rethink of the Spenser character and his world from the ground up throws out almost everything other than the character names and most basic character traits specifically his sense of justice and honor. In some ways purists will find some of it an an abomination  (I mean they fucking dumbed down Hawk. How the hell do you take the smartest guy in the room and lower his IQ?)  They also threw out all of this wonderful material that could have generated dozens of films. Not that that you would know it, but because they rewrote so much the possibilities are just wiped out. (Don’t get me started)

On the other hand Wahlberg makes a good Spenser. He has the right built. He has the right attitude. I wish he was a tad more refined but for the most part he is a good hero. Winston Duke as Hawk other than being a tad too clueless is charming (I loved him making the bed with the son of his friend). No it is not the character of the books or TV versions but it is uniquely his own creation. I mean that in a good way.

The action is good. The mystery is mysterious enough to keep us watching.

High art it is not but it is entertaining. So long as you can just let the film do what it wants to do I recommended it.
Posted by Steve Kopian at March 14, 2020