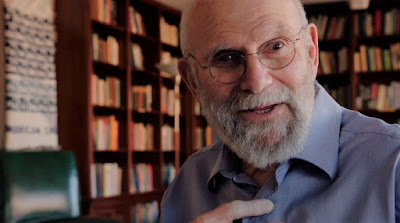 Ric Burns portrait of the great Oliver Sachs left me both sad and happy. sad that he was gone and happy knowing that I could always revisit the film and hear him talk about his life, life in general and everything in between.

Made for American Masters and opening in theaters in May, OLIVER SACHS: HIS OWN LIFE is a true wonder and the Reelabilities Film Festival is happily previewing the film. It is a portrait of the doctor, teacher and writer largely in his own words. It is a beautiful explanation of the man, his work and  all of the things he found interesting.

If you are wondering who Oliver Sachs was he was the person Robin Williams played in the film AWAKENINGS. It was Sach's book of the same name that put him into the public consciousness and the film which shot him into super stardom.

Ric Burn's film is an arc of a life,made in part, in Sach's final days and it affords him a chance to leave behind a record of who he was and what he did. It is his own final statement on what he did and why. His final monologue about his life wrecked me in a good way and it has haunted me in the weeks since I heard it, never leaving me.

I loved this film a great deal. Sue me I am an admirer of the man and this chance to go round the block one more time delighted me. I am even happier that thanks to this film I can revisit the man any time I want to. Apologies if that isn't much of a review but Oliver Sachs as someone who simply was beyond words.

The film plays the Reelabilities Film Festival Wednesday, April 1 at 7P as par of their Virtual film Festival. For more information on how to watch (there will be a Q&A after the screening) go here
Posted by Steve Kopian at March 29, 2020