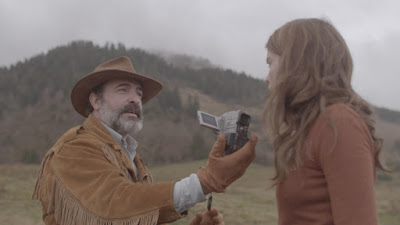 Quentin Dupieux ‘s latest is a another weird film. The story of a man played by Jean Dujardin who falls in love with a frilly buckskin coat.

I have a mixed relationship with Dupieux. His film RUBBER, the story of a killer tire is a clever idea that should have been a short. His police procedural KEEP AN EYE OUT! is the middle ground and it was funny but wildly uneven. I loved his REALITY which was a trippy look at the nature of reality. Add Deerskin to the side with Rubber. This is a film with some funny bits, but mostly the humor eluded me. This is just a little too much it’s own thing. Give Dupieux for trying to make a film that is reasonably normal and for casting the ever game Dujardinin the lead, but it’s still a bit out there and there wasn’t enough reason for me to care, even for a brief 75 minutes.

Recommended for fans of Dupieux and anyone who is willing to try something off center. All others are advised they are on their own.