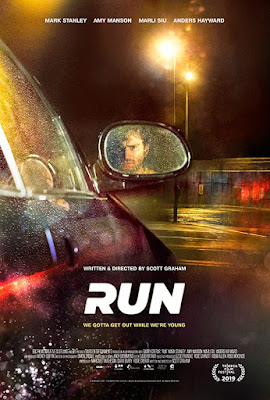 Feeling trapped by his home and professional life, a father takes his sons hot rod car and ends up cruising the night looking for races and ending up traveling with his son's pregnant girlfriend.

Good small scale film, with some great driving sequences and lead performances is in desperate need of an introductory 20 minutes. As good as what we have on screen the film suffers from a complete lack of real explanation of who the characters really are. References to a past life isn't enough, in this case, for us to fully understand the father's inner turmoil. It might have worked had the central driving sequences had more dialog, but the sequences are simply driving or racing with a minimal amount of dialog.

Don't get me wrong, I genuinely like the film, I simply want the film to be better and resonant.
Posted by Steve Kopian at March 11, 2020