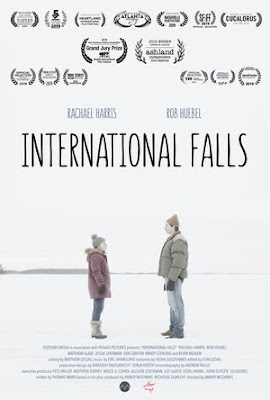 A hotel desk clerk who dreams of being a comic hooks up with a fifth rate depressed comedian who come to her backwater town for comedy night.

Bittersweet dramedy about the choices we take in life and the hopelessness and hopefulness we all feel. This is the tale of two lost souls grasping for something. It is not a romance but a collision of souls in the frozen north.

Forgive me if I seem subdued about the film but that’s the way I am. The interaction between Rachel Harris as the clerk and Rob Huebel as the comic is really good. There is a lot of thoughtful conversation and more than a healthy amount of desperation. They are both looking for something and floundering around trying to find it And the performances are great.

The problem beyond that is so much is uneven. The stand up is just okay, some of the side characters (for example Harris' husband) are too goofy and the tone is really weird with an out of place piano score during a rather downbeat moment. It’s kind of like director Amber McGinnis wasn’t certain how to handle the material – or as if someone did the editing and made the wrong choices. It’s never fatal but it keeps the film grounded every time it begins to take off.

Truthfully I like the film for what it is trying to do and for several moments moments that spoke to me but I don’t love it. Its worth seeing, but I don’t know if you need to run out to do so.
Posted by Steve Kopian at March 20, 2020