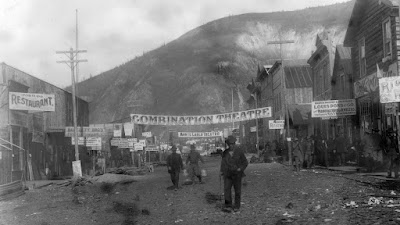 This is a must see. If you love film, film history, just history and great filmmaking DAWSON CITY FROZEN TIME is a must. The history of an end of a the line town where people and films went when they could go no further. Made up almost entirely of clips found buried in the frozen permafrost it is a stunning sensory experience unlike any other. (You need to see this in a darkened room with no distractions.) Somewhere along the way you will come to understand how we got here and how the movies can heal the soul.

Somewhere about the time that Bill Morrison was explaining how Dawson City was responsible, in a way, for Ken Burns and his style I started to quietly sob at the back of the Museum of Modern Art's screening room. Somehow Morrison's marriage of film, photos, music and history completely overwhelmed me and I started to cry.  There was nothing particularly moving about the notion (though one of the first things I wrote in my notes was a comment that it played like a Ken Burns film) rather it was a combination of the unearthly beauty hitting me with the odd sadness that this place, that was the end of the line was for some, was, in it's way, a key factor in the development of the film industry - though no one knows it. To me, who loves film probably above everything else, it was a moment where I realized that if it wasn't for this small town movies might have been different. (As well as history since the family fortune for the Trump family started in the whorehouses of Dawson City).

The most amazing thing is that there is almost no spoken words. Its almost all text. The images are mostly the found nitrate prints mixed with another cache of still photographs. Morrison  blends them all together to create a cinematic poem that goes right  past the conscious into the subconscious where it affects us like a dream. One drifts off on the sound and images as if on a trip. I've never seen anything remotely like it - except in Morrison's other films. DAWSON CITY FROZEN TIME is likely to be one of the best films you'll see all year - it was for me. 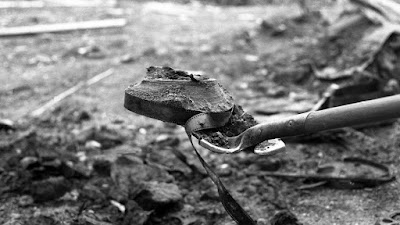