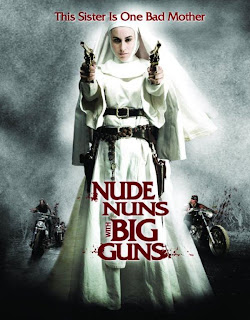 The title says it all. Its a high concept title for the low brow set and its great deal of fun. If that's good for you then yu can get it n most VOD platforms. If it's not your type of film- not to worry another film is coming soon.

Sister Sarah is pulled off a bus with some fellow nuns by bad guys (including some clergy), turned on to junk, set up in a brothel and made the plaything of various bad guys. When she wakes up from a near overdose she finds that she has been set on a path of redemption by god. Her mission kill everyone who has wronged her and anyone who gets in her way.

Pure exploitation film is summed up in the title...which is a good thing and a bad thing.

The good thing is that you know going in exactly what the film is aiming at.

Its a bad thing because they take it as a license to be very tongue in cheek and very knowing. Some times that works but most times it doesn't and the knowing attitude creates a distance that makes the film less than it could be. Machete, one of the best exploitation films of recent years let you know it was over the top, yet managed to play it perfectly straight so you became invested in what happened. With Nuns we're never really invested in what happens, we never get anything approaching real character development, we just get pawns to be moved around. Most of what we feel we bring to the film. Its all about cramming as much exploitation material in the shortest amount of time. On that level the film is a rousing success with all of the things promised delivered in great abundance.

As you can tell I'm very mixed on the film. On some level I have to admire the fact that this a competently created exploitation film that is bold enough to wear it's heart on it's sleeve. On the other hand I wish it hadn't been so damn jokey at times, I mean honestly this film is good enough that had the film played it straight we'd have a true classic of the exploitation genre.

Ultimately Nude Nuns With Big Guns is a film for people who can see the title and know that the film doesn't get much better than that...it comes close...but mostly it is what it says it is. (And as ambivalent as I am towards it I am hoping for a sequel)
Posted by Steve Kopian at March 18, 2020