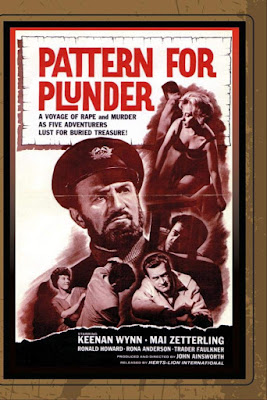 If you want a nifty black and white thriller PATTERN FOR PLUNDER is just the ticket. Years ago when I started diving into B films, specifically thrillers and mysteries, this was a film that many of the older collectors I knew  swore by, and insisted that I see it. They were right, is a great film.  If you want a great film to curl up on the couch on a rainy evening this is it.

This is currently available on Amazon and highly recommended.

Keenan Wynn shows up on the door of several of his old army buddies promising a fortune in lost Nazi gold if only they join him to get it. Crazy as it might sound they join up and before long they are hip deep in intrigue.

What can I say, this is a small scale gem, the sort of film that deserves to be seen. Its perfect proof at how good B- movies could be even as late as the 1960's.

This is a well acted story of post war greed that doesn't want to be anything other than an entertaining evening. There are plot twists and a traitor in their midst and if you put your mind to it you might be able to figure things out, but its so much fun just watching whats going on on screen that it really isn't worth the effort. Why spoil the fun of the mystery by sorting it out way too early?

If you come across this film take the time to watch it since its 90 minutes well spent.
Posted by Steve Kopian at March 17, 2020