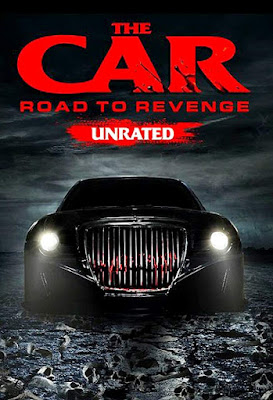 42 years after James Brlin stared in THE CAR about a murderous and demonic car terrorizing a desert town a "sequel" appears that has a similar car possessed by the spirit of a dead District Attorney taking out the gang that killed him in the not too distant future.

Weird ass mix of scifi, horror and post apocalyptic gang films seasoned with a weird sartorial style to create a WTF film that is strangely compelling viewing. I'm not saying it's good, its really not, but it is so out there that you have to keep watching. Over and over again I kept asking myself why I was watching but yet I could never look away.

I would love to see the Rifftrax guys do this film.

Over the top, crazy, stupid and the sort of thing yo not only can't look away from but that you want to inflict on drunken friends THE CAR: ROAD TO REVENGE is recommended.
Posted by Steve Kopian at March 22, 2020