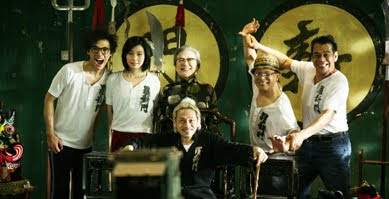 This is my review f GALLANTS from 2010's New York Asian Film Festival. It is a glorious old school martial arts film that came from nowhere to win all sorts of awards. It is an absolute delight. It is a film I've given to friends who say they don't like martial arts films.

This film is a joy.

You can see it on Amazon and Fandor


The power of some people is such that they get a standing ovation when they walk in a room. Bruce Leung, making his first trip to America got a standing ovation as he stepped out to introduce his film Gallants. It was the only true standing ovation I saw in 23 screenings at the NYAFF. I was standing too. I know why, it was something that had to be done, I mean here was a man who was in so many of the martial arts films I watched on TV growing up, still plugging along 45 years after he started- still in martial arts films. I got the sense from most of the people in the audience that it was the only way we could give back to a man who gave us so much.

It was so nice to have the film be as wonderful experience as was seeing one of the people who helped form my love of martial arts films.

The plot of the film has a nebbish being sent from his real estate firm where he’s botching everything on an unpaid punishment assignment. He’s to help remove tenants in and around a particular area so they can redevelop the whole place. However before he can find where he’s to be, he’s attacked by some tough guys after he berates a child who was shooting him with a toy gun. Pretty much having his head handed to him, he is saved by the crippled and advanced in years Tiger (Bruce Leung) who happens to be walking by. Tiger rescues our hero who then through circumstances ends up at Tiger's dojo which has been turned into a tea house, its days of a dojo gone when the master, who is up stairs in bed, slipped into a coma. What happens next is the discovery of the fact that the guys our hero was going to visit was the ones who beat him up and the ones he was to help evict was Tiger and his friends.

Rambling throw back to the martial arts film of the 1970's this is one hell of a good time at the movies. The characters are all people you genuinely like. You actually like a good number of bad guys which is kind of unheard of in this sort of film. The film plugs along at a good clip taking us from comedy sequence to martial arts sequence to touching moment wiht the greatest of easy. Its a film that makes you go wow even as its making you laugh or cry.

The cast, full of martial art faces from the 1970's and 80's is note perfect. Not only can these guys fight they can also act up a storm. They are the reason that you'll love this film. Its amazing and its so sad that everyone involved had to fight to get this film made.

I started this post by mentioning Bruce Leung and I really have to single him out for praise. With his broken gait, his thick glasses and bucket hat he comes off as a guy you'd never expect to kick your ass, but once he gets into the tick of it he instantly becomes a guy you never will want to mess with again. He also touches you creating a character as big as all of Asia. Its utterly masterful.

I really liked this film a great deal. (And so did audiences at the NYAFF who voted it the Audience Award along with Castaway on the Moon which I reviewed earlier today)

If there is any flaw in the film its perhaps that the ending seems kind of abrupt and not what you expect. I kind of had the feeling that they ran out of film so they ended it. Still its a small flaw in an otherwise wonderful film.

If you get the chance you really need to see this...which maybe difficult since the film has no US distributor as of right now. I suggest you keep an eye out for it because this film is a great deal of fun. (If I see it on DVD anywhere I'll let you know)

One of the finds of the year.