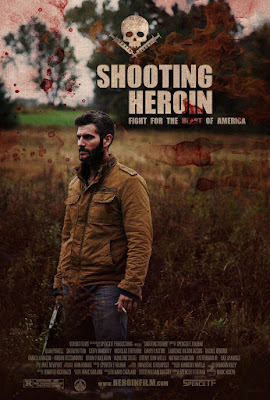 Playing at the now virtual Garden State Film Festival tomorrow (March 28) and hitting VOD on April 3 SHOOTING HEROIN is the story of what happens when a small town takes it into their own hands to deal with the rampant drug problem.

A solid cast, Sherilyn Fenn, Cathy Moriarty, Nicholas Turturro, Alan Powell, Garry Pastore, and Lawrence Hilton Jacob, lift this earnest and heart felt tale up to being something that is worth giving a shot.

You will forgive the lack of detail. It is not a bad film, more it didn't quite click with me. As any follower of Unseen Films knows I see a lot of movies every year and as such some films click and some films  don't regardless of being good or bad. SHOOTING HEROIN is, unfortunately  one of the non-clickers.Its a film that didn't leave me with a great deal to say but which I liked enough to point out that it is playing at the festival and on VOD.

If you are interested in seeing a good story about drugs in a small town try it.

A single ticket for $15 and watch that movie block.
A Saturday pass for $30 and watch  every  one playing tomorrow
A Whole Festival Pass for $55 and watch everything all weekend.

For more information and tickets go here.
Posted by Steve Kopian at March 27, 2020