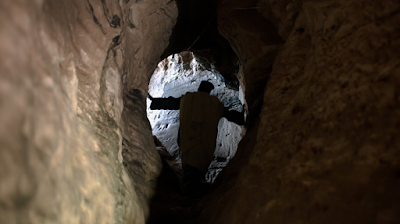 Two hour meditation on life, time, the interconnected nature of all things, god, the universe and everything else. It forces you to ponder how you see the world and what you think it is all about. We do this by looking at a blind man who ran through Death Valley, a photographer who searches out the oldest living things in the world, scientists looking for the source of the creation of the universe and the world, and a journalist who walks from Ethiopia, where humans were supposed to have come into being, to the farthest point south in South America, the farthest anyone traveled from our birth place. It is a film about silence and music and humanity.

When you see ECHOES OF THE INVISIBLE don't think about it. Just let it wash over you. I say this because going in I simply started it and let it go. I didn't think about what it was or where it was going. I just let it go. While early on there were moments when I wanted know how it was going to tie it all together after a while I just fell into the film. I stopped caring about the end. I simply let it be and my mind and heart  opened.

Both pretentious and profound, as well as bumpy and perfect ECHOES has placed me somewhere beyond words. It is a film I can not intellectually explain to you since my reaction to it was purely emotional and spiritual. It is very much a film that is going to effect and affect every one who sees it differently. As the film frequently points out we all have out own perspectives. It is a film that touched me deeply, making real many notions of how I see the world. Its final section about how certain monks throw the books away and simply pray by gazing on the world makes perfect sense to me. There is much more that meant a great deal to me.

If you need to know how deeply the film affected me consider that half way in I stopped the film to tell a couple of friends that they should see it, and that was before the ending utterly wrecked me in the best possible way.

I got nothing beyond that. That was one of the most profound  things I've seen. Right now it is dancing in my heart and head making me feel things but not giving me the word to express the emotion. What I feel are things no words could ever adequately express. You will just have to see the film and travel to that place inside your own heart.

See this film for in a time of uncertainty and fear it puts it all into perspective. It may not make it better but it puts the world into a place where things are a little less dark.