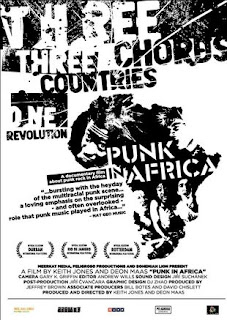 This is a review that ran in 2012 as part of our coverage of the New York Film Festival.  It is a dynamite music doc that will open you hears to some great Music (I bought some CDs after seeing the film). If you want your musical horizons opened this film is for you.

On Amazon Prime and other streaming services.

Such an example is Punk in Africa, a wonderful, sonically amazing look at punk music from around 1970 to today, and how the music has been used as a force of change.

The film is a you are there history of the music in South Africa (primarily), Mozambique and Zimbabwe, consisting primarily of new interviews and archival footage (much of it completely unseen in the last 40 years- the footage of National Wake was processed superficially for the film) the film puts you into the punk scene in a way that few films have ever manged.

Both Chocko and myself had our ears and eyes opened by this wonderful film.

The trouble with trying to explain the film is that what the film shows us is very different than what we know. This is a side of African life that is outside of not only my experience in the US , but also some people in Africa's as well since the pressings of some records were only a couple of hundred. Indeed some of the bands were formed by accident as tapes of jam sessions got out and had people clamoring for more.

The film is also kind of difficult to get at first since while the story is told in chronological order (more or less) by the people involved, it's done in away that is more like hanging out in some one's living room and having them tell you everything without being specific about dates and such. I felt a little at sea at first but then it calmed down.

I really liked the film a great deal and I stayed to the end of the Q&A even though it would mean I would not get home until after 1AM. (The Q&A can be seen below)

Its an amazing film and I hope that the DVD has tons of extras because there is simply too much to the story.

If you love music and good movies, you must make an effort to see this film if and when it gets a regular US release (its only screening at the NYFF was last Wednesday) 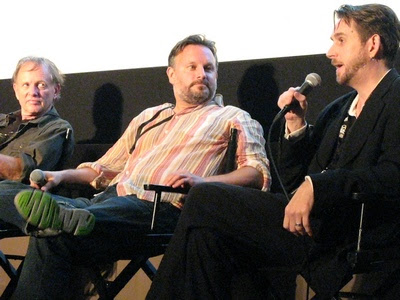 Below is the post screening Q&A which was filmed by Chocko and appears below. Based on a long discussion with someone who attended the press screening the material in the Q&A is very different than what the press saw. The Q&A also has details on how to find the music in the film. (The photo above is also his handiwork)