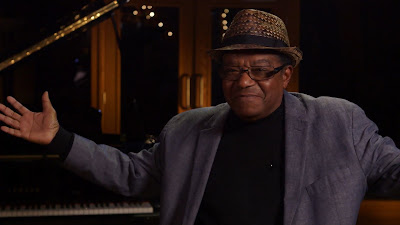 The history of doo-wop music told by the people who wrote it, produced it and sang it.

This film is absolutely amazing. I suspect this is going to end up a well loved classic in constant rotation on PBS or where ever this film ultimately finds a home.

Beginning with the vocal harmonies of church the film then quickly moves to explain how that evolved into the harmonies of groups like the Mills Brothers or the Ink Spots. From there it moves on to when Frankie Lymon and the Teenagers burst on the scene and kids everywhere realized that they too could have a recording contract. From there it all exploded and the film charts how the groups of the 1950's and 60's begat the vocal groups of today.

Driven by perfectly chosen music and wonderful stories the film feels like a long lost best friend calling you to hang out once more.  Waves of nostalgia crash off the screen as we are taken back in time 50 or 60 years to the point where the songs and stories are new and had never been heard before.

A joyous celebration of the performers and their songs this film will put a smile on your face that will remain there for days.

I can't say enough good about the film other than go see it and hope they have the volume cranked.

A wonderful treasure,  STREETLIGHT HARMONIES is very recommended when it hits home video on March 31.
Posted by Steve Kopian at March 26, 2020