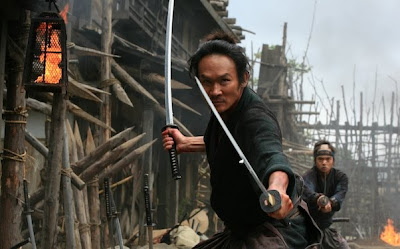 This is a modified review from 2011 when a cut version was released to theaters in the US.  If you can see see the full two and a half hour version do so since it has details that deepen the characters and the situations. If you can't the US release version is fine.

Fr me this film remains one of the greatest films ever made making a perfect pairing with 7 SAMURAI another truly great film about honor, loyalty and sacrifice.

I dont know what to say other than get some popcorn and fire up the streaming services and watch this bad boy- and remember to pause it if you have to leave  during the final 40 minute battle scene.

Tale of Honor loyalty and our ability to move away from peace, Takashi Miike's remake is one of the best films I have ever seen.

The plot of the film concerns a samurai who is asked to kill the heir to the Shogun. The man chosen to be come Shogun is insane and taken to raping the wives of his hosts or tying up families and using them for target practice. He wants nothing more than to see death and destruction of everyone around him. He went so far as to hack off the arms and legs of the daughter of one of his enemies and use her as a play thing until she bored him. When she is asked by our hero what happened to her family and village, she writes him the response Total Massacre using a paint brush in her mouth (the villain also chopped out her tongue). Our hero is moved and he assembles the title characters to try and make a go at killing the heir.

The show piece of the film, and what everyone will be talking about, is the forty plus minute final battle. Taking over a town the heroes have turned it into a death trap, with the idea that in the close confines of it's buildings and alleys they will be able to stand a chance against the men protecting the villain. It's an amazing sight to be hold and any attempt at describing it will not do it justice, you will just have to see it.

What makes the film so good is that Takashi Miike creates a bunch of characters that you really care about. You love the good guys, you hate the bad guy and you really feel for the guys who have to protect him.

It's this last bit that creates interesting thematic currents in the film that raise the film up out of the typical samurai action film. As is pointed out frequently you are suppose to protect the Shogun and your Lord. You are to follow the wishes of the man above you. The question is at what point do you stop? When is it okay to step away and chart a new course? Do you really have to follow the orders of a man who is a complete and utter nut job? I'm sure that the actual samurai wouldn't have seen the answers in the same terms as we do today, but on the other hand what do you do with a crazy leader?

I love this film more than I can say. I'm a huge fan of Miike's and this is by far the best thing he's done. It's a film that balances his wild over the top action with heartbreaking story telling. It's a film that proves beyond any doubt that he is one of the top filmmakers in the world today.

As I said the film is a masterpiece. It was one of the best films I saw in 2011 and it is my list of  films of all time.