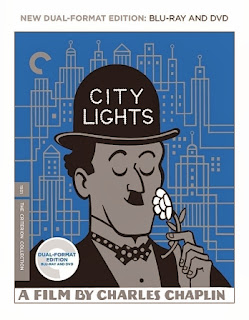 City Lights is my favorite Charlie Chaplin movie, but it wouldn't be if it weren't for its famous ending. It's hilarious, of course, and there's so much genius in Chaplin's meticulous comic machinery and filmmaking technique--one can marvel at the expert skewering of a hole in the Little Tramp's pants and the ensuing attempts at decorum, or each well-timed and well-placed movement of the boxing scene (it may be the cinematic equivalent of a chess match set to the "Sabre Dance"), or the gradual build to the punchline while our hero tries to shovel the streets of manure, or the number of gags that can be packed into a finely choreographed long-take--but the film is ultimately about the difficulties of human kindness, and the greatness of City Lights is made apparent in that heart-rending finale.

(Spoilers are coming, so stop reading and watch the film if you haven't already. City Lights is good for the soul)

The film centers on the shabby Little Tramp's attempts to help the poor blind Flower Girl. He has no actual means of his own, but a chance encounter with a suicidal drunk millionaire allows him to do good deeds with a little bit of filthy lucre. It's kindness that drives the Little Tramp to thwart a stranger's fatal dive into the river, and it's that same kindness, mixed with an unreasonable romanticism, that makes him want to help the Flower Girl. He buys her food, pays her rent, and even helps send her off to Europe to get her eyes fixed, and all for her company and the occasional chaste, chivalric kiss upon her hand. He suffers so much for being kind even though this love for the Flower Girl is one that probably wouldn't be reciprocated (but more on that later).

Kindness has been on my mind a lot lately since it's the time of year when everyone is temporarily kinder and gentler to others. I recently re-read George Saunders' commencement speech to Syracuse graduates asking them to be kinder people. The speech, which you can read in full here, had gone viral in the early summer, partly from its optimistic content and partly from the well-deserved praise for Saunders' newest collection of short stories, Tenth of December. (In some ways, the speech is a relative to his shot story/essay/fictional press release for the PRKA, the People Reluctant to Kill for an Abstraction). And since it is the holiday season, I recently rewatched It's a Wonderful Life, which itself is a movie about kindness and how hard it is to be thoughtful of others since it's usually to the detriment of one's own ambitions. I can't help but feel that the Tramp seen in City Lights is a bit Ellen from the commencement speech since he's so meek and crushable, and bit George Bailey for the same reasons and because he's relentlessly crapped on by the fates, and perhaps a charter member for the PRKA given his attempt at, as the philosopher Emmanuel Levinas would have put it, being for the Other.

As in real life, kindness in City Lights is terribly difficult. George Bailey, nearing the end of his rope, says that all he got for his prayers and good deeds was a lousy smack in the face. For his trouble in Chaplin's film, the Little Tramp is tossed into the water, shouted at, picked on by toady newsie scum, roughed up, knocked out, laughed at, shoved around, ignored, forgotten, discarded, and eventually thrown in the clink for a crime he didn't commit. I can't help but find some thematic connection between the rock that gets tied around the Tramp's neck as he thwarts the millionaire's suicide and the rope for the timekeeper's bell that gets tangled around the Tramp's neck during the big fight: being kind means taking on other people's burdens and, sometimes, getting the living sh** beat out of you. And yet he keeps going because his kindness, like his capacity to love, is inexhaustible. Oddly, this makes me think about a line from a newly anointed Christmas movie pariah, 2003's Love Actually: "Okay, Dad. Let's do it. Let's go get the sh** kicked out of us by love." 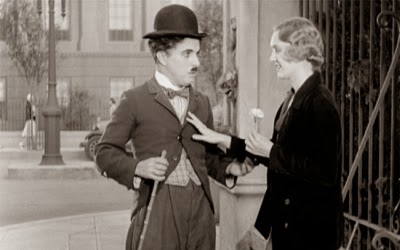 That brings me back to the ending of City Lights and the important moment of recognition that occurs between the Tramp and the Flower Girl, who is now able to see. Up until that point, I think that these characters exist as abstractions to each other and to the audience. The Tramp is madly in love with the Flower Girl, but she functions as a kind of idea of love; the Flower Girl is enamored with her own idea of her benefactor--she thinks he's a millionaire--rather than the dowdy Tramp himself. He can be her hero and he can help make her life easier, be he could never actually be with her because he's afraid of being something other than an illusion. She deserves a great man, and he can only be that as an idea. Had she been able to see in the first place, she probably wouldn't have given the Tramp the time of day, let alone entertained ideas about his heroic return to her life.

When the Tramp and the Flower Girl see each other again at the end, it's through a flower shop window. He helped bring her out of poverty and blindness; he's done something for someone else that he couldn't possibly do for himself. She's laughing at him, though not out of malice, and the Tramp seems content simply to observe her through the pane of glass. She's still just an idea of love, and he's happy his pain has made a difference. The fact that she's thriving there in front of him has lifted his heart out of the gutter. Everything he's gone through was worth it, even if he's become a wilted little man. Since she's still just an idea of love, he tries to leave when she approaches him, perhaps because he's frightened of complicating her present happiness with the truth.

What's devastating about what happens next is that when they touch, they cease to be mere ideas to one other. The Tramp is so hesitant to say anything, struck dumb by her beauty and her sense of concern for him in this real first meeting, one without illusions and so barely sincere. In his face and his gait is the anxious fear of reprisal and rejection, but that unease melts away. I think what I read on his face after fear, among other conflicting thoughts, is the tenuous joy that occurs when, for once, the worst doesn't happen. The Flower Girl's reactions are similarly packed. She sees the face of kindness, and it's not the dashing stranger in top hat and tails, but a person who with nothing of his own still gives all he can. The characters' performances lose the large gestures of pantomime and become subtle motions and ticks of expression. The faces are complex and lived in and heartbreaking because the feelings they evoke are so ineffably human. By those final shots of City Lights, we're are no longer dealing with the abstractions of a buffoon and his would-be lady love; instead, here are the large existential concerns of two people who have tried to be good to one another in their own way.

Throughout my mid-to-late twenties I felt an ambiguity about the ending of City Lights. It's still one of the most astounding endings to a movie I've ever seen, but it's hard to say where this relationship would go from here. Can either of them love each other, and what about the fact that this relationship--even at a purely ethical level--is predicated on lies and mistaken (or withheld, or assumed) identity? It's a complicated conclusion to the story because it leaves us at the emotional height of a revelation without its fallout.

On my most recent watch of City Lights, I find myself a little less cynical and more touched. I noticed the way the Flower Girl held her hands around the Tramp's, and the way her face quavered as her realization continued to deepen, and the way her hands drew his hands closer to her chest. The Tramp is still chewing at his thumb, the Flower Girl will not let go. Like their first meeting when he fell in love with her, they are so still in the moving world. I'm not sure they'd ever fall in love, but I know simply that they will be kind to one another, and that's enough.