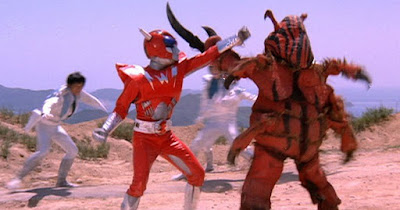 I'm reposting Mr C's review of SUPER INFRAMAN because there is no other film quite like it anywhere. Yea it rips off Ultraman and other similar shows but it is really its own glorious thing. Pretty much everyone at Unseen loves the film - and some day I will get Hubert to write down his thoughts on the film.

If you like wild and crazy give the film a shot. It can be had on most VOD platforms

Due to the success of ULTRAMAN & KAMEN RIDER in Hong Kong, Shaw Brothers Studio came back with a HK phooey kaiju chop of their own, known as SUPER INFRAMAN! Literally translated from the chinese characters as Chinese Superman! I think the marketing folks wanted to name the movie as similiar to Ultraman as possible without stepping on the boundaries!

This film is most certainly a fun filled mashup of colorful & evil monsters led by a pretty, but devilish lady princess with a one track mind to invade & destroy earth with the help of her radioactive goons! What stands in their ghoulish ways is a crazy scientist, his research team, & their nuclear bionic creation, a masked Chinese heroine blessed with the extraordinary powers of kung fu, a thunder fist, laser beams, a fire bomb, & the ability to grow to an enormous size!

For being a 1975 production, the special effects, costumes, and the Skeletor-He Man looking set design was pretty darn good in my opinion! The kung fu fighting was also first rate and flowed really well, thanks to the fighting choreography of the great Tang Chia! If you have ever seen a Power Ranger episode then you’ll have a decent idea of what to expect with this film! Super Inframan is eons better with a more twisted looking monster cast, crazy FX, cooler costumes, & more fighting!

Some of these outrageous monster characters included the mutant drill, fire dragon, plant monster, the crabman that turns into a gi-normous version at will, and the skeletor mount devil soldiers! The evil princess & her henchwoman, the sexy witch eye had costumes that looked like Madonna might have copped’ for one of her world tours with her torpedo breasted inspired self! The Chinese superman was played by none other than DANNY LEE! (The Oily Maniac, The Killer, The TeaHouse, Blood Brothers). Though, I’m pretty sure when the masked superman came on the screen, it wasn’t Danny Lee in the costume as I have never seen him kung fu fight like that before! Especially, when Super Inframan is doing backflips on the clouds and does butterfly kicks on the crabman! All would not be well on earth as the Professor and the Chinese Superman look for ways to save society from the mount devil demons!

Some cool scenes (there are many) that stood out for me included the boat ride with the monsters & the professor to mount devil, the supersize fight scene, & the He Man like set melee between the mutant drill, skeleton soldiers, the research team, & Super Inframan!
Posted by Steve Kopian at March 18, 2020