Film Movement, in Partnership with Local Movie Houses Across the Country, Launches a Virtual Cinema for First-Run Releases 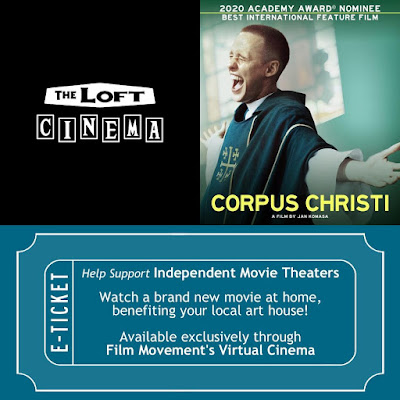 FILM MOVEMENT, IN PARTNERSHIP WITH MOVIE HOUSES ACROSS THE COUNTRY, LAUNCHES A VIRTUAL CINEMA FOR FIRST-RUN RELEASES

New York, NY (March 20, 2020) - In an effort to support cinema aficionados and movie theaters during these difficult and unprecedented times, beginning Friday, March 20, New York-based distributor Film Movement, in collaboration Art House Convergence, will offer consumers a virtual theatrical experience with current first-run releases and newly-restored classics. Through their signature streaming platform, FILM MOVEMENT PLUS, movie exhibitors will have the opportunity to open their virtual doors and invite their patrons to rent new theatrical release they'd otherwise be enjoying in their local art house theaters.

The FILM MOVEMENT PLUS - VIRTUAL CINEMA initiative will launch today with a slate of films certain to appeal to foreign film lovers, midnight movie buffs and fans of classics world cinema alike, including Jan Komasa's Oscar®-nominee CORPUS CHRISTI, Diao Yinan's noir thriller, THE WILD GOOSE LAKE , Luchino Visconti's final film, L'INNOCENTE, and Sonia Braga's sexy breakthrough comedy, DONA FLOR AND HER TWO HUSBANDS. Additional titles may be added in coming weeks. FILM MOVEMENT PLUS - VIRTUAL CINEMA will be hosted on the FILM MOVEMENT PLUS platform, and both Film Movement and each participating theater will promote these releases to theater goers through regular marketing channels. Additionally, movie goers can visit FilmMovement.com to find out what virtual films are playing in conjunction with local movie houses. Virtual tickets will cost $12 and exhibitors will receive 50% of all sales.
Initially, Film Movement has signed up more than 20 participating theaters across North America, including:

"With the film industry being besieged on all sides by this global pandemic, we needed to implement a platform that would give film lovers a way to enjoy our releases while still supporting their local movie theaters," says Film Movement President Michael Rosenberg. "Through our streaming platform, we were able to offer a solution that would allow audiences to watch films from the comfort and safety of their homes, while still helping to bolster the business of our movie theater partners who are now, unfortunately, dealing with the complete shutdown of the exhibition industry."

"We are proud to collaborate and innovate with Film Movement on the Virtual Cinema Initiative," says Alison Kozberg, Managing Director of Art House Convergence. "This partnership, which will sustain the public's access to international and art house cinema, also helps protect the theatrical experience so that theaters can continue to serve us in the future. Social distancing is imperative now, but after it concludes we are going to need art and cinema in our lives and projects like this one insure that the independent sector can continue and thrive."