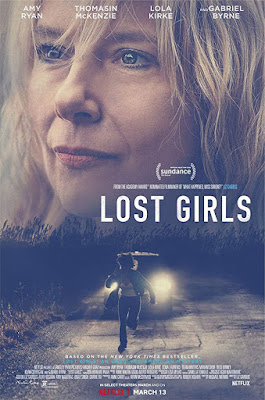 The story of Mari Gilbert, whose search for her daughter Shannon lead to the discovery of a potential serial killer leaving bodies along Long Island's Ocean Parkway.

Good true crime drama feels a little too much like a Lifetime movie of the week to fully engage all our emotions. As good as the film is, it chooses to take typical roads in telling the story with every type of scene you'd expect in the story of a crusading parent trying to find their lost child.

Admittedly part of my blahness toward the film is due to living one county over from where the bodies were found. I have been by where the events took place simply because I live on Long Island. I have also been following the stories via the local media, and the rumor mill  of living in a small town, all of which suggest a Gilbert's search for her daughter opened up doors no one wanted opened.  Of course all the juicy tales of possible corruption are not part of this story so it is understandable that they were left out.

As it stands LOST GIRLS is a good small scale story of one mother's quest for justice and the beginning of a bigger tale that needs to be told.

Available on Netflix.
Posted by Steve Kopian at March 23, 2020