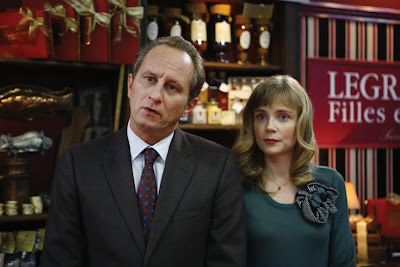 I saw this way back in 2011 at my first Tribeca as a member of the press. It is a charming film that has delighted me ever since. Yes it is a typical mismatched romance but the people are so utterly charming you really won't care.  It's also so good that even if you don't like romantic films yu'll love this.

See it on Amazon

One of the jewels of this year’s Tribeca Film Festival is one of the most charming romantic comedies you’re likely to see.

The story of the film has Angelique, a young woman with social problems, she’s not good with people and gets flustered easily, looking to get a new job at a chocolate manufacturer. She thinks it’s to make chocolate, instead it’s to be a sales rep. She is interviewed by the owner of the company,Jean-Rene, who also has similar emotional problems. He hires her, more because a ringing phone flusters him, rather than anything else. What we can guess and they don’t know is that they are the perfect mismatched pair and soon will be crashing into each other, despite their best efforts not to.

The director, Jean Pierre Ameris, said in the press notes that he wanted to make a film that was going make people who are afraid to try things, less frightened, and honestly he succeeded in spades. I’m a bit of a social misfit myself (one can’t write up as many films as I have if one has a full firing active social life) and when the film was over I wanted to go out and try something daring, I didn’t, but I wanted to.

This is a film that makes you feel good. You will laugh and smile, feel warm and fuzzy and probably even shed a tear. It’s a glorious 80 minutes with two wonderful people.

If the film works its because of Isabelle Carre and Benoit Poelvoorde as the pair of love birds. They sell everything and make you fall in love with them to the point that you over look any flaws elsewhere in the film (Well drawn plot? More like a sketch). Frankly these two are so good that when the film is over you just want to dive back in and spend more time with them.(But as much as I’d love to see more of the characters I never want to see a sequel. I don’t need to see what happens next. Let me hang out with them and eat some chocolate, but don’t give me another film, it just won’t work)