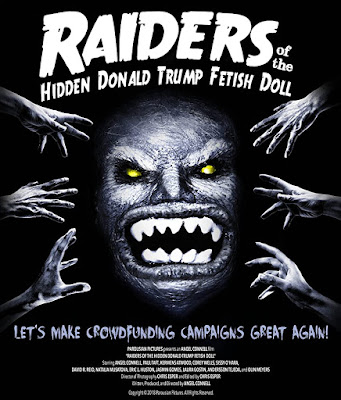 Angel Connell's wicked short film concerns Connell trying to get crowdfunding for his latest film and offering up as a perk a fetish doll of Donald Trump. Cnnell doesn't realize that whoever has the doll controls Trump and people are willing to get it.

While the film is as simple as you can go, Connell appears to have shot it in one room with some friends doubling up parts,  the result is very very funny. Some times simple is better, or in this case funnier as Russians, North Koreans and others show up to threaten Connell into giving the doll up. What could have and should have been a one note film actually is so perfectly modulated that that it gets funnier with each turn.

Honestly I didn't know what to expect going into the film and I kind of wary of it until I started to laugh. I honestly thought the idea was going to run out of steam, but it never did thanks to Connell understanding how long he could play the gag and then only going that far.

A small gem of a film.

RAIDERS... played the Sensus Film Festival this past weekend in Russia and is slated to play many more festivals over the rest of 2020 so keep an eye out for it
Posted by Steve Kopian at March 19, 2020