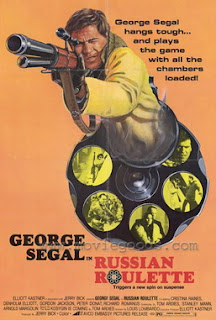 I don't know of that many people who have seen  this so it's a film I can easily recommend to anyone who likes a good thriller. An old school cold war thriller it has tension, funny lines and George Segal showing why he was/is a great dramatic actr and action hero.

There was a time when George Segal was not primarily known as being a comedy regular on TV. Back in the 1960’s, 70’s and 80’s Segal was an action star. He was (and is) an actor of incredible versatility with the ability to play anything that came his way. If you want proof consider that Segal more than held his own against Richard Burton and Liz Taylor in Who’s Afraid of Virginia Wolf. Somewhere along the line Segal decided to have fun and he moved away from serious roles into sit-com. While the move has kept Segal a constant on TV, its kind of a let down for those of us who miss his more serious work and action roles.

Back in 1975 Segal starred as a Canadian Mountie on leave for punching out his boss in Russian Roulette. Segal’s character was resigned to sitting things out when he’s assigned to baby sit a Russian émigré during an important state visit. It’s a simple job, and as simple jobs of this sort go, it goes horribly wrong, his charge escapes and looks to be heading off to kill the Soviet Premier who is in Canada. Of course there is way more going on with a far reaching conspiracy in motion, and there is only one person who can stop the plot…

I fell in love with this film back in the late 70’s and early 80’s when it was a staple of late HBO scheduling. I’d stay up or get up at all hours in an effort to see it. By the time I had a VCR the film played less frequently and I was reduced to copying it off a commercial station on an  over night screening (I later transferred the film to DVD commercials intact).

The film is a solid B action film that plays very much like Andrew Davis’ The Package with Gene Hackman. I mean that as compliment to Russian Roulette and an ever slight knock to the package since it’s clear from watching the films in reasonably close succession that Davis probably saw the earlier film and stole some of its street sense style. This is the sort of perfect film to pop on on a rainy day with a bowl of popcorn and beverage of choice.

This is one of those films that’s fallen off the face of the earth. Most people I know have never heard of the film and even my sources for hard to find films don’t have it. This needs to get on DVD, since while it may not be a great film its entertaining ass all hell.
Posted by Steve Kopian at March 20, 2020