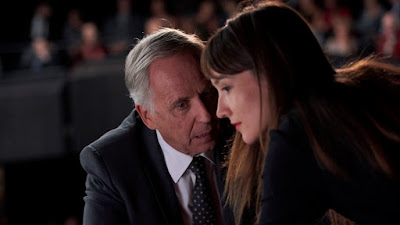 Philosophy student Alice is hired to help the mayor of Lyon who has lost his ability to come up with new ideas by giving him ideas. Uncertain about what this means she is thrust into various projects including a celebration of Lyons 2500th anniversary and potential run for the Presidency of France.

Well made, well acted film is simply an okay viewing experience. Part of the problem we are dropped into the middle of everything with no real sense of who anyone is. Yea, everyone is nice, but who are they and what do they really want? We really don't have any sense for a good potion of the film with the result it maybe too little too late.

The film is a heady discussion of politics and the philosophy behind them and its often very intriguing-but just as often its maddening since the film never gives us a full discussion of anything. We are either coming in the middle of something or walking away before we have a conclusion. While I know that is life, but this a film and we need a bit more, especially since the discussion wants to be the backbone of the film but we need things to link up a little easier.

Frankly I honestly love all the characters, the discussions and the plot twists and turns. What I don't like is that the film is trying to do way too much in too short a time. Has this been an hour longer and had events been allowed to play out, where things were connected more naturally and we had a bit more time with characters where they weren't driving the filmmakers' points this would have been one of my all time favorite films. As of right now it's an okay film where some truly great things are trapped.

ALICE AND THE MAYOR plays March 7 and 11. For more information and tickets go here
Posted by Steve Kopian at March 06, 2020