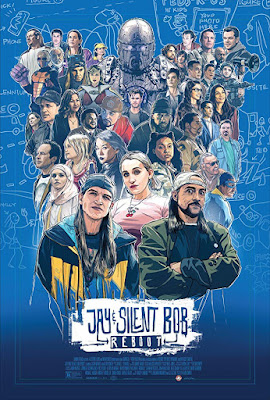 Kevin Smith goes to the well again to bring back Jay and Silent Bob and take more cash from his fans in a film that is only for the most forgiving fans.

The plot of the film has Jay and Bob trying to get to Hollywood in order to stop Kevin Smith from rebooting the Bluntman V Chronic franchise. It is full of knowing jokes, self referential riffs and details only true fans will know or care about.

If you are not a huge Jay and Silent Bob fan this film isn't for you. Actually even if you are a fan I'm not sure this film is for you since anyone I know who is a Smith fan wasn't really thrilled with it when it played special screenings. You have to know the references, care about the references and not care that there is a sloppiness to the  writing.

I'm not going to get into Kevin Smith rant but his recent feature film choices would have been so much better if he didn't insist on the stupid humor (TUSK would have been great as a balls to the wall horror film), sticking a finger in the eyes of critics (YOGA HOSIERS was not a film but a challenge to critics) and going the  easy route (this film)

If you are a fan of the Jay and Silent Bob films you may like this. Mostly though I think it will disappoint despite moments.
Posted by Steve Kopian at March 24, 2020