Unseen Stay At Home Festival: Film Nineteen: The Gospel of Us 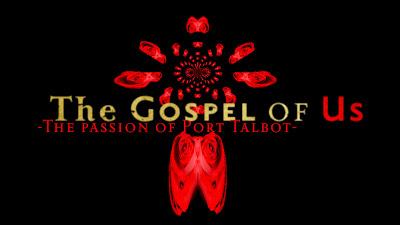 I was first a fan of Dave McKean's art as a result of his comic covers. It moved on to his other work and films over time. I stumbled upon a copy of this film and fell in love with it. I loved it so much that I asked McKean for an interview and he agreed.(see the links below)

This is a magnificent film made during a one of kind non-repeatable 3 day theatrical performance. It was a film that had one shot of working and it worked wonderfully.

The film is currently streaming on Amazon and other services and is highly recommended.

The Gospel of Us: The Passion of Port Talbot is a film that is bewildering fans of its cinematic director Dave McKean. It is not a fantastical film of his own creation and therefore, for some of his fans, seems to be not worth taking notice of. The reality is the film is a one of a kind cinematic confection that is really unlike any other film I’ve run across.

The film is nominally a record of a new styled Passion Play that was put together by actor Michael Sheen in his home town over Easter weekend, 2011. The play lasted over three days and wandered all over the town. It told the story of a teacher who disappeared into the wilderness for 40 days, and then returned to town. He then got under the skin of a fascist corporation and its puppet police force before ending up crucified. In actuality the film is mash up of documentary, fantasy, narrative, allegory, and several other genres, into something wholly unique.

The film was the result of McKean and Sheen talking about a book project that would highlight Sheen’s three most important roles: Hamlet, Edgar Allen Poe, and the teacher in this play. As they discussed the play, McKean asked who was going to record it. When he was told no one, he suddenly found himself pressed into service.

McKean was given more or less total access to the rehearsals and the performance with one proviso: he could never be out in front or interfere with the performance in any way. (The one time it did happen the cameraman was admonished, which worked to the production's advantage since it drove the paparazzi into the background...it also makes for a truly magical moment on screen). Due to the vast expanse of the show (it literally covered the entire town), and a tight budget, he was limited in the number of cameras he could use, and didn’t get everything he wanted. However, thanks to the BBC, who was making a documentary, and the copious use of iPhones by the audience, he was able to supplement his footage with the work of others. 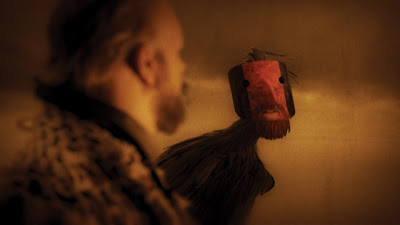 This wonderfully weird mix of documentary and narrative is very clearly not a straight forward recording of the event as it happened. As anyone who sees the film will quickly notice, it's full of altered images and changes. At one point one of the characters is morphed into a McKean designed bird creature. At other times McKean has erased the vast crowds that were watching events, or he has frozen them in time while mystical things happen. He has added some sequences with a godlike builder, others with a small girl (who may be dreaming the whole thing), plus there are some pick-up shots. The passion play as performed has been altered for McKean’s own purposes- and we are so much the better for it.

To be completely honest, I don’t know entirely. I'm very much leaning towards saying it's one of the best films of the year, but I'm not completely sure...though each time I watch it, it is certainly one of my most treasured viewing experiences. I’ve seen it three times now (twice as the film alone and once with the commentary), and I’m still slightly vexed by the picture. It is most assuredly a stunning achievement. It’s a film that refuses to be anything but what it is. Due to the fact that the film is so incredibly unique, despite on the face of it seeming to be typical, one’s instinct is to fight it. I suspect that the film’s incredibly low rating at IMDB is the result of this battle between expectations and reality.

To be certain, the film isn’t perfect...then again it never could be. The imperfections are the result of a combination of the original event, how the film was shot, and budgetary considerations. There are bumps and missteps here and there. Some of the language can be a tad arch for a film (but perfect for a play), at other times it's spot on perfect and moving. 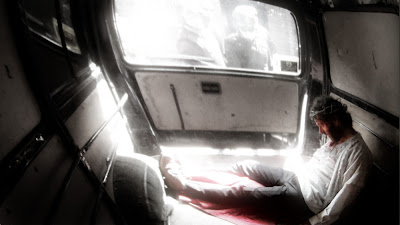 No matter what you think of it, you have to remember that except for a fluke or pure chance, this film would never have existed. It’s a film that came together because someone had suggested recording what was a one time only event.

I love the film a great deal. I know I admire it much more than that, though each time I see it my opinion goes up greatly. This is a film that tries, and succeeds, in being something special.

It’s also a film that requires multiple viewings. Never mind that one should listen to the commentary on the DVD with the director so you can marvel at how he put the film together. It simply requires multiple viewings just so that one can really see it and appreciate its own rhythms. As I've said, I've seen it three times, and each time I'm more and more amazed at the wonders contained inside it.

As for fans of McKean, you all should be making an effort to see it, for while the film is a reimaging of a passion play, he has fused it with his own visual style. There is not only the aforementioned bird creature, but also image manipulation that could only have been created by the artist himself. Anyone saying this isn't a McKean film hasn't seen it.

My Interview with director Dave McKean about the film can be found here and here.
Posted by Steve Kopian at March 21, 2020