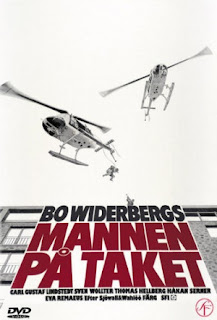 This is one of the first foreign  films that I fell in love with. A killer thiller I have no idea why no one talks about it any more, especially since there is a big fan base for Scandinavian  thrillers.

I highly recommend the film which someone has uploaded to YouTube

Man on the Roof was the point at which I consciously was aware that foreign films could be more than Bergman and Fellini and Herzog. It was a moment where the wide spectrum of films out side of the US snapped into my brain. Yes, I knew that there were dubbed films from other lands, but as much as I liked them, I viewed them as disposable (now they are indispensable) and that the only films that mattered were the “art” films of the great directors.

Yes, I was reading way too many high brow film books at the time. Never mind that I was watching everything, the great stuff was the great filmmakers, which is of course horseshit.

Man on the Roof shook me from that. That was the point where I kicked down the barriers and got off my high horse. Finally all films were good, all films had value. My brief stay in the snob cabinet was done.

This is not to say that Man on the Roof is a bad film, or a lesser film, or anything. Its simply to say that it’s a great film that came from some one who wasn’t a recognized god of cinema.

Yes Man on the Roof is a great thriller and crime drama.

Based on one of Per Wahloo’s Martin Beck novels (they are the source of  The Laughing Policeman which starred Walter Matthau as well as numerous European films and TV series) Man on the Roof tells the story of a police investigation into the shooting of one of their own in a hospital bed. On the face of it he was a good cop and good guy but one they start looking into his background they realize that this good guy was a bad man and set in motion a disturbed individual who becomes the title character

A taut procedural the film is largely the hunt for the killer. It’s the sort of film that will have you shifting in your seat as you wait for it to play out. One of the joys of the film for me was the sense that anything could happen and that no one was safe. People get hurt and die. I know that had I been familiar with the Beck series of novels I might not of have feared for the lead character, I mean he stars in a series of books so he can’t die, but even having seen the film a good 10 or 12 times over the last 30 years I still tense up and I still worry about who is going to get shot this time.(unsurprisingly its always the same people)

I love this film. On some level it’s not a great work of cinema, but it is a damn good thriller. Its also a damn important film in my movie education.