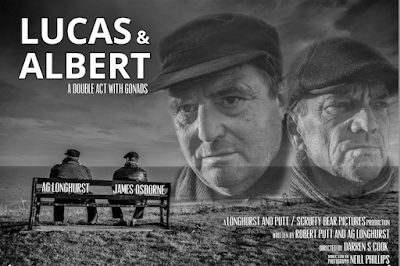 Recently arriving on Amazon Prime in the UK and soon to hit Prime in the United States LUCAS AND ALBERT is a low key and ultimately melancholy comedy drama about two older hit men hired to tidy up a robbery that went wrong two decades earlier. As the two normally lone wolfish hit men travel the country together killing the men they once knew both get a sense that something is up...

Nicely acted by a bunch of older actors and actresses has its share of chuckles in it. It also has a big ball of sadness as well, partly because we see and experience the trouble of being older, but also because in watching this film you have a sense that this is not going to be all right. Lucas and Albert were brought together for a reason and while there is several ways this could go odds are the good one isn't the likely one.

I have watched it twice and while it made me chuckle the ultra low key nature and down beat sense kept me from fully connecting, at least the first time through. It wasn't until the second time through the film that I fully engaged, or engaged as much as possible, since knowing how it was going to go still kept me at arms length. This isn't my cup of tea.

To be fair LUCAS AND ALBERT is not a bad film. As I said the acting is great, there are some laughs and the black and white photography is gorgeous making the film look like its taking place on one long cloudy day. For me just seeing this in times such as we are living through made it something I couldn't connect to.

On the other hand if you like crime comedies with a dash of sadness give this film a shot.