UNSEEN FILMS STAY AT HOME FESTIVAL: Film Fourteen: THE PIRATES WHO DON'T DO ANYTHING 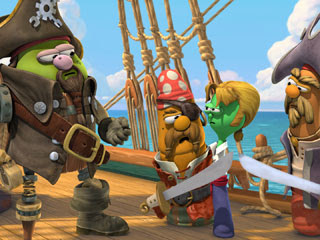 As I say at the top of the review I am not a fan of Veggie Tales. I am not a fan largely because they tend to be a bit too preachy for my tastes.  I love the non- preachy bits because the shows/films ect I've seen are actually really well written and acted- which is why THE PRIATES WHO DON'T DO ANYTHING is such a delight. It's just a good story with nothing overly preachy or teachy. Its so good that I know several adults besides myself who are huge fans of the film, and back before streaming they would  explain the copies of the DVD were for "their kids", excpt they didn't have kids.

I'm not a fan of Veggie Tales. However, in small bits I find them quite clever and funny. It was with some apprehension therefore that I first saw The Pirates that Don't Do Anything (okay I saw it because the trailers and commercials looked funny).

The plot has three of the Veggies working at a pirate meal and show place like Medieval Times, but with pirates. They are little more than waiters who want to be in the show. When an audition goes wrong and gets them tossed, they figure their futures were bleak. However, a magic ball from the past mistakes them for heroes and transports them back in time to help a Princess who has to rescue her brother from a real pirate. I'm mangling the plot but you get the idea.

Mangled plot or no, I thought this was hysterical. I love this film and frequently watch it on cable over and over again.

No, its not the be all and end all, but it is clever and witty with a nice sense of silliness. I loved the cheese curls and the walking rocks and some of the songs...and I just had a good time...which is the best recommendation I can give.

Out on DVD and on cable and various streaming services.
Posted by Steve Kopian at March 19, 2020