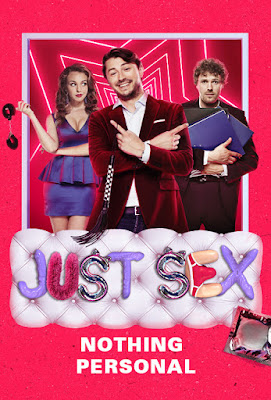 Out on VOD is the Ukrainian sex rom com JUST SEX, NOTHING PERSONAL. If you want a charming and adult change of pace it's worth taking a look at.

Serhiy's life is thrown in to disarray. his girlfriend refuses to marry him because he is terrible in bed. Distraught he goes to spend New Years Eve with ladies man Vasyl. However things go really wrong at the club and he ends up drunk and pantsless on the cold streets. On of the strippers named Diana takes pity on him and takes him home. She agrees to teach him how to be a great lover. Spicy romance results.

To be honest this is almost two films. There is the try too hard set up  that plays out up to the point of the pantsless meeting and then there is everything else. If you are willing to wait for the film to flip then you are in for a really charming little film. To be certain the film doesn't break any new ground, but once it gets going it does what it does like a fine tuned machine.

That the film works as well as it does is due entirely to the cast.Roman Lutskiy, Angelika Nikolaeva, Natalya Mazur, Sergey Pritula, and Andrey Danilko are all great with the to leads absolutely perfect. (please forgive me not singling them out I can not find a cast list that lists the names in English).

Other than the opening bit of the film the only thing really wrong with it is in the presentation. The version I saw, while providing subtitles for everything that was said did not subtitle anything else do references to anything written, such as in a scene near the end, is completely lost. Still we get the idea and it it is more annoying rather than fatal.

Recommended for anyone wanting to go off the grid.
Posted by Steve Kopian at March 19, 2020