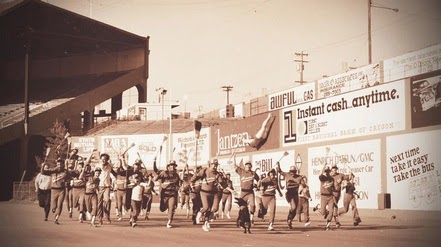 This is a repost of the 2014 Tribeca review.  As you will see this film blew me away. It was also the first time I seriously considered getting Netflix because I wanted to show my the film to my Dad. I don't know what else to say other than this is a great film.

I saw 35 films playing at Tribeca prior to the start of the festival- Battered Bastards of Baseball is the best one of those.

My original plan for reviewing this film was just to post a picture of my smile-something that never left my face and made my face hurt. That proved impractical so I figured maybe I'd try to explain the reaction the small group of us at the end of the press screening  which was about ten of us all looking at each other and smiling and trying to make sure that what we just saw really was what we just saw. Yes it was.

I think the best way to describe the film is to relate that one of the other writers called the film, "The sort of thing that makes sitting through all the other crap worth it" Yes it is. If movie reviewing was like mining for gold Battered Bastards is like striking the mother load.

How do I describe it? It's a feel good David and Goliath tale where it was not so much about win or lose but having fun.

The film is the story of the Portland Mavericks, a single A baseball team started by Bing Russell who was Kurt Russell's dad. Putting up his own money he started an independent team to fill the void left by the loss of the failed Triple A team The Beavers. Everybody thought Russell was mad, and they laughed at him until his rag tag team won and upset the status quo.

Its a hell of a tale and it's told by those who lived it, including Kurt Russell who played for the team.

I have no idea what to say except buy a friggin ticket and go. This movie will make you laugh and smile and cry and smile and feel so god damned good it should be illegal.

Go buy a ticket. You only have two shots at seeing it at Tribeca (the 23rd and 26th) and once word gets out odds are the tickets will go really fast. I'm telling you now so you can go buy a damn ticket.