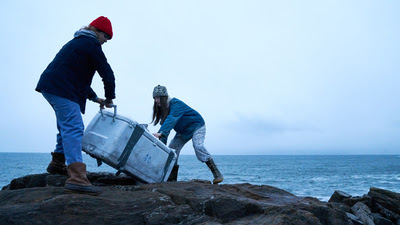 Who would have thought to use sea shanties as a linking device for a modern film noir, but we have to thank directors Savage Cole and Danielle Krudy for doing so since it made BLOW THE MAN DOWN something special.

When their mother dies leaving them with a  mountain of debt the pair don't know what to do. However as bad as that is things get worse when one sister kills a man, the pair try to bury him at sea, find a stolen fortune and have the whole underbelly of their quaint little town exposed.

Intriguing look at small town gentility is a great deal of fun. While hitting some of the expected spots, the film stands out thanks to the songs, the black as night humor and the realization that in a small town murder is possibly the least terrible thing you can do. I love that Cole and Krudy are well aware of what they are doing, and use the social commentary to keep us  not only hooked but laughing at the proceedings.

The cast, headed by Sophie Lowe and Morgan Saylor is stunning. The women play it perfectly and they are wonderfully aided and abetted by a cast of vets that make it all look easy.