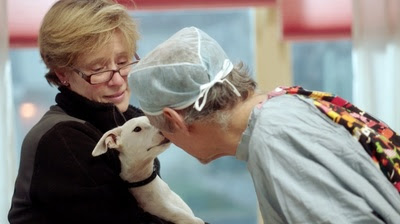 Dr Martin Goldstein is the dog doc. A vet woking out of the Smith Ridge clinic located in South Salem New York he specializes in a holistic approach to treating animals. Using alternative medicines, supplements, and unconventional treatments he manages to extend the lives of animals way beyond the expectations of conventional medicine.

There really isn’t a great deal to say except that this is a marvelous film. It will fill you for hope that should your pet end up sick that there really is someone who can help them. The Dog Doc will make you want to take your pet to Dr Goldstein and his clinic whenever they get sick. There is something about the care and love Goldstein shows his patients and their owners that is truly something special. Its magical actually  as he manages to not only heal the animals but their humans as well..

And, to be honest, the film also  broke my heart since had I known about Goldstein and his clinic I might have been able to save two of our cats which developed symptoms no doctor could diagnose.

Aside from hope and smiles the biggest take away from the film is to make you wonder not only why more vets aren’t doing what he does, but also why regular physicians aren’t as well. Clearly he is on to something and it should be explored on every level. Clearly Goldstein’s approach to health and kick starting the immune system is something we should all be exploring.

A wonderful film that is highly recommended, even more so for animal lovers.
Posted by Steve Kopian at March 10, 2020