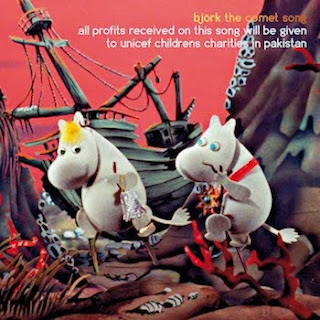 I saw this film with John, Randi and Bully at BAM back in 2012, hIt was my first real introduction to the Moomins. An off beat atypical seeming Moomins film, it is definitely different than the recent UK series. It is perfect for anyone wanting a film that is not your typical animated nonsense. It is also a hopeful film about the possible end of the world as only the Moomins can deliver

The film is an animated film done in a mixed media style, There are paper cut out characters, some made of cloth and other things.

The story has Mr Muskrat telling the young Moomins that a comet is going to hit the earth and kill everyone. His father and mother send him on a river trip to an observatory to talk to the astronomers who hopefully will tell him everything will be okay. After many adventures they get to the observatory where they find out the comet is indeed coming. They then head home so they can be here when it hits. On the way back they see some of the devastation the comet is causing, the sea has dried up, and the locusts are swarming. Will they make it home in time? The film is probably darker than it sounds.

It also just sort of stops. The danger is done, roll end credits.

I liked the voice cast which includes Max Von Sydow as the narrator(who wouldn't want him to read you a story), Stellan Skarsgard and Mads Mikkelsen is great. They manage to make it all okay even though when you think about it it's really not.

I'm told this is based on one of the earlier Moomins stories so it's not as moody as some of the later ones. If this isn't moody I don't know what is.

The film was released in 3D though I'm not really sure why. Yes it's nice to see the layers of the animated material, but at the same time the film doesn't scream out 3D.

A decidedly different sort of animated film that is worth searching out, especially since Bjork does the opening song.
Posted by Steve Kopian at March 20, 2020